THE PLANT-BASED POWER COUPLE:
​OUR STORY 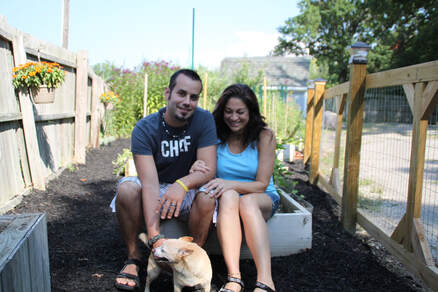 By Lori DePietro-Standen
Excerpt from The InnerStrength Life: A Blueprint for Finding Empowerment through Weight Loss and Vibrant Health.

Jon and I met through an online dating site, and our story is as amazing as it is comical.

I was living in Columbus, Ohio, and had been on my health journey for about eight years. I was a busy Plant-Based Nutritionist, Personal Trainer and health blogger with my own business, and a single mom. Jon was a Sous Chef at a country club, having graduated from the prestigious Culinary Institute of America in Hyde Park, New York and having studied under Michael Symon in Cleveland for six years via his famous restaurants, Lola and Lolita. For both of us, life was just too busy to get out there and meet new people, so online dating seemed like the only option.

For those of you that don’t know, online dating provides none of the social graces or niceties that you might experience with someone you first meet in person. People pick up and discard one another without a thought, and brutal honesty is the name of the game. It’s like a never-ending bout with speed-dating! After six months of this, I was ready to call it quits out of sheer emotional exhaustion… but in a last ditch effort to meet someone I could connect with, I expanded my “available area” from 25 miles from my home to 75 miles. When the pictures popped up, only one caught my eye. It was a man and a dog, and as an animal lover I was instantly intrigued. I sent him a simple “hi” and, not expecting much, went on about my day. Meanwhile, unbeknownst to me, the person I reached out to was in a similar boat. Growing weary of the online dating game, he had told his parents that same morning that he planned to delete his account as soon as he got home that evening. Then he received my message.

Jon and I connected right away, as if we’d always known one another. For both of us, it was like coming home. Although neither one of us had expected anything more than to find a little companionship through online dating, we each felt we’d found our soul mate. And strangely, it made no sense that he even popped up on my screen to begin with. At 120 miles away from me, his house was far outside my 75 mile radius. Within 6 months, we were engaged, and we married a year later.

While our story was like a fairy tale in many ways, it was very challenging in others. How could someone who was primarily vegan and laser-focused on health build a consensus with a classically trained Chef who was, admittedly, apt to use bacon and heavy cream in most meals? Don’t get me wrong, Jon was very respectful of my training, my health and my preferences right from the start. But his situation was much different. Surprisingly, many folks in the food industry have the worst eating habits! They get so tired of cooking that they end up relying on snacks and fast food when it comes to their own diet. When we met, Jon had gotten off the fast food train, but was still dependent on unhealthy snacks, daily hamburgers, and an abundance of soda to get through his long, busy days. Most of the time it didn’t affect me too much, other than the constant barrage of chips and candy brought into our house. He would get home later in the evening after we’d both eaten, so we each just did our own thing. But finding a meal we could eat together on his days off was tricky, and without realizing it I began to make too many compromises.

Before long, I found myself with a raging sugar addiction and beginning to gain weight due to unhealthy foods creeping into my daily diet. I was concerned that, rather than being a positive influence on Jon’s diet, I was allowing his habits to become a negative influence on mine. A lot of couples struggle with this! Many of my clients report that their partner is their eating buddy, or that they don’t feel supported in making healthy changes.

But I knew Jon would be supportive… I just needed to set some guidelines so we could, together, find healthy foods that we both loved. And, voila! The recipes in our book were born, and they represent the way we eat all the time now. We’ve found a way to marry nutritionally vibrant foods with incredible flavor, incorporating simplicity with the comfort of traditional favorites. Our motto is “no deprivation!”  And like me, Jon has never felt better.

​Now, we bring these foods directly to your door via The PlantPowered Chef. We hope you love them as much as we do, and that they’ll help you embrace your journey toward total health.

WE LOVE TO SQUEEZE

We believe in REAL FOOD.
​We use organic, non-GMO produce and all of our recipes are made with gluten-free ingredients.
Questions about allergens? Contact us.